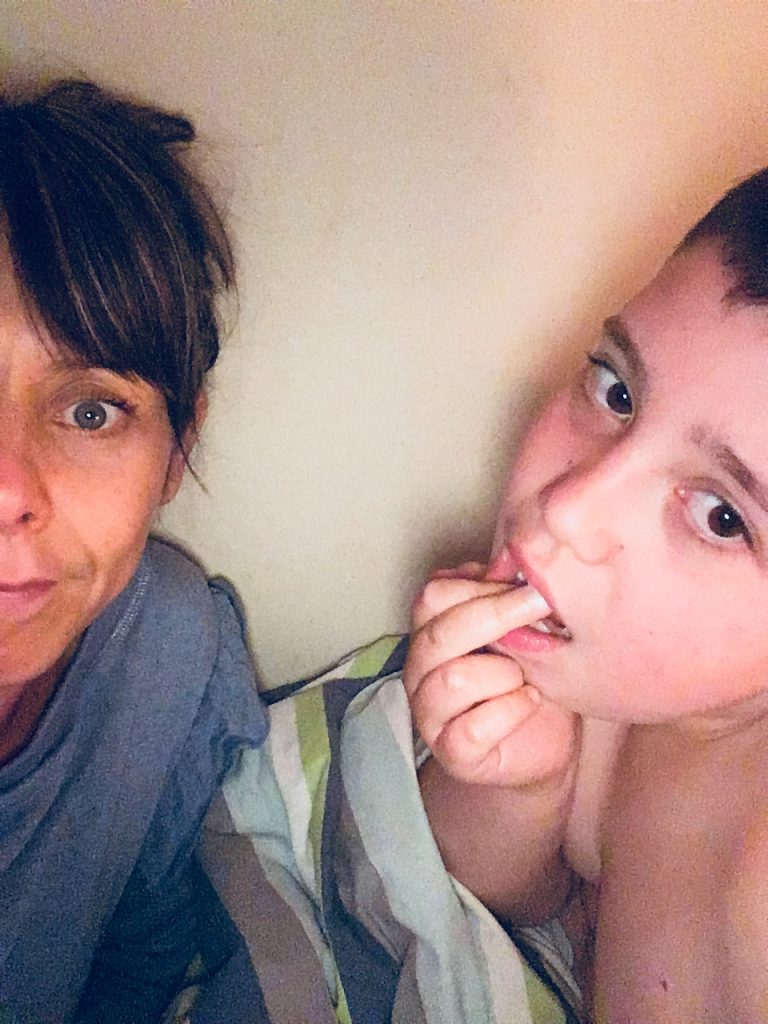 It has been a privilege to spend some time with my child and to make something together that we will always have. When talking to other parents I find I am become increasingly appreciative of this process – of documenting of a whole year together with Isaac. Ours is a Mother-Son relationship that is based on a different set of needs and expectations. And what we have done here more simply, is capture a moment in time.

There have also been more complicated things at play. Ideas like consent and permission. Like – how do I truly know that Isaac is happy with all of this?

Isaac is very vocal and has a lot of language. I know that I will always treasure this especially when I remember the early days when I wondered how verbal he would be and if at all. This said, Isaac’s abilities with language can mask also his struggle when processing certain things. To the untrained ear Isaac can appear to have developed appropriate literacy – he is sociable, able to converse and has amazing recall skills. However, the more you listen and spend time with him it can become clear that he has found coping strategies to navigate social situations. Yet despite his challenges, it would be true to say that Isaac is finely tuned in the art of putting things in perspective both in terms what he says and the way in which he makes me prioritise what is actually important.

Isaac has a predilection for ‘bad news’. Each time my Mother in law visits, she comes furnished with a set of bad news stories for Isaac and he couldn’t be more thrilled! My take on this is that he thrives on big emotions and reactions. He loves the clarity of bad behaviour and people being annoyed, angry or upset. This is more tangible than the more gentle, mediocre emotions contained in other less dramatic events.This also applies to our film. I decided early on that Isaac would be the first editor of all our clips. At the end of every month we would look back over what we had recorded and he would get to choose the material we kept and what we deleted. This was comforting because it felt that Isaac was in control and it was then no surprise to me that he favoured the moments of melt-downs and conflict over other things. He is also very loving so he quite likes the kissy-cuddly bits too. In all of these choices I came to see he was unknowingly pushing my boundaries and what I was comfortable with sharing. Maybe this is because he is fearless in a way that I am not.

So in these ways I have been led by him and he has been my barometer for what it is ok to show and share with others. On watching the first edit with Geraldine Heaney this week (our brilliant collaborator and film artist) I felt that Isaac has been more invested in the process than the product. When he saw himself he complained about hearing his own voice and seeing his face on screen (I shared that feeling about me too!) so he chose instead to watch it without sound, dipping in and out of interest. I do think that he’ll warm to it though. New things always take time. But I wonder, does he see what I see? Does he know what a child like Isaac might make people think and feel? Of course not.

I have had to advocate for my son endlessly and to help interpret his world for him in many of his moments of anxiety and fear. I probably always will have this role. But I also feel that he too interprets the world on my behalf and has shaped me in ways I cannot fully know. I am more enriched by him than I would ever have been without him and I see the world differently because of him.

Isaac has never once referenced his own disabilities or referred to himself as ‘different’. I have always been ready to answer the difficult questions that I assumed would come with time- but they never have. This also means that he doesn’t see difference in others. What a liberating way to be! So in this way I suppose the belief that we should be investing in ways to put young people out there whose bodies and brains work differently is all mine. This is my objective with the film – and Isaac is such a glorious example of this.

Isaac is also a big brother-with a twist. In a number of ways his sister Eleanor, in her five years has already surpassed milestones that Isaac is yet to (or may never) reach. So their sibling dynamic can be particular. She has given me ‘first times’ that I never knew. Having a daughter has been the most utterly delightful addition to my life, she is pure joy. There is also so much that is rewardingly ordinary about how they love and accept each other. And along with Eleanor’s Dad Paul, (Isaac’s Step Dad) they are both inadvertently caught up in what we capture in the film- but I think they are ok with it. Eleanor helps to show the most typical side of Isaac through their sibling relationship. It is also fair to say, (and he will hate this bit) that if it wasn’t for Paul I truly believe none of us would be doing as well as we are. He is my absolute rock of love and support. His motto, which he has had to play on repeat for me many times is that ‘everything will always be ok’ simple but hard to believe some days. But if anyone can make that true then it feels like it is him. At one time we were just us, Isaac and me. Now we part of a family of four and the struggles and the love too is balance and shared. So in reality, disappointingly for Isaac, it is  not all bad news.

There is a lot I am still learning about raising my children but especially Isaac. I can only show our specific experience of dealing with these complexities and I know that some families with similar challenges may also identify. For those that don’t, I hope that this film we have made may offer some other insight and connect with in some small way. After all, Isaac is also just another 11 year old and has some traits that can be described as reassuringly ‘ordinary’ although you may need to look a little more closely to find them.

Eleven is a film by Philippa Clark and Isaac Clark O’Malley with film-maker Geraldine Heaney. It will open at Tramway as part of the Unlimited Festival on 18th October 2018.